Tens of thousands of years ago, the first artists painted images on the walls of caves. They collected, painted and ground holes in shells, presumably to wear. It was the very first art, created by what we call “modern humans,” or Homo sapiens.

Except, it turns out that some of that cave art may have been created by Neanderthals — our ancient and, by evolutionary standards, failed cousins. At least, that’s what a team of scientists is now claiming.

The painted caves were discovered in Spain. The walls were the canvasses, and the paintings are bold and clearly not some kind of smeary accident. The paint used was red ochre, from soil mixed with water.

One geometric design looks like part of a ladder, forming rectangles. There are stencils where someone pressed a hand up against the wall and then apparently blew liquid ochre over it. Someone painted swirls of bright red dots and patches onto flowing curtains of stalactites that hang from the cave ceilings.

Most of this work has long been known and attributed to humans, who originally came from Africa and are believed to have arrived in Spain about 45,000 years ago. 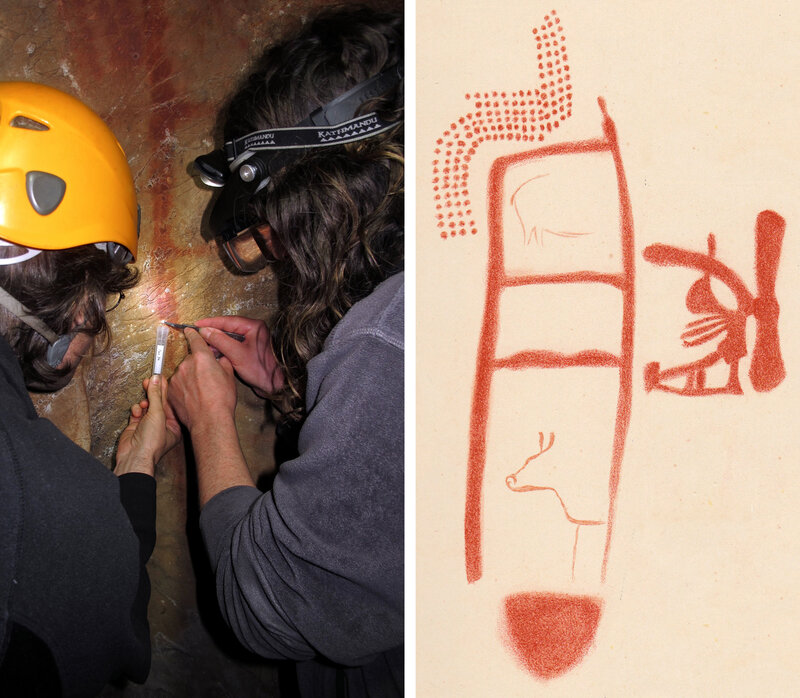 Left: Dirk Hoffmann and Alistair Pike sample calcite from a calcite crust on top of the red scalariform sign in La Pasiega.Right: Drawing of Panel 78 in La Pasiega by Breuil et al.(1913). The red scalariform (ladder) symbol has a minimum age of 64,000 years but it is unclear if the animals and other symbols were painted later.

But here’s the catch. New tests on the rock and calcium carbonate that formed over parts of the ochre show that they were painted 65,000 years ago. That’s about 20,000 years before the first modern humans got there.

“The only species that were around at that time were Neanderthals,” explains Alistair Pike, an archaeologist from the University of Southampton in England who was part of the team that did the work. “So, therefore, the paintings must’ve been made by them.”

Pike says the original technique to determine the age of the paintings was used decades ago and wasn’t very reliable. It measured how much carbon was in the rock, which is prone to error. So these scientists employed a different dating technique using radioisotopes of uranium and thorium. That technique showed the paintings were much older than first thought. That turned the conventional wisdom, that only modern humans made art, on its head.

Perforated shells found in sediments in Cueva de los Aviones and date to between 115,000 and 120,000 years.

But, art? That requires abstract, symbolic thinking — recreating something real, like a pattern or a landscape, with symbols.

“We have examples of pigment use and cave paintings way outside of Europe [in Africa], and we have them in Europe, clearly demonstrated to be of Neanderthal origin,” says Dirk Hoffmann, a physicist with the Max Planck Institute for Evolutionary Anthropology and an expert on the dating on the paintings in Spain. He says this new analysis shows that art evolved independently in both places.

Hoffmann suggests that making these paintings may well have required planning, organization, perhaps even language, though he acknowledges that’s speculation.

And clearly, some of the paintings required hearty determination. “They’re actually hidden away,” he says. “If you want to see them you walk into the deepest, darkest part of the cave and you actually have to lie down and crawl to the cave wall and look up, and they’re actually on the ceiling in little overhangs.”

In a fourth cave, the scientists also found another pile of evidence pointing to Neanderthals: painted shells, some with a single hole drilled through them, perhaps to accommodate a string. The shells lay in a seaside cave and date back about 115,000 years — far earlier than the first known sign of modern humans in Spain.

Here’s Why Scientists Are So Dismissive Of UFOs Next post